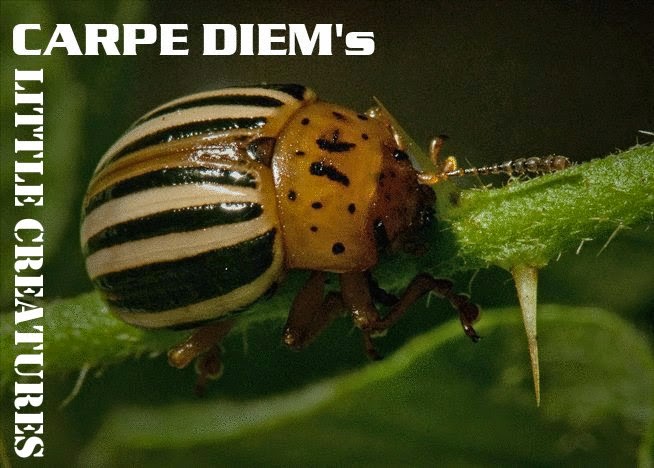 A new feature at Carpe Diem Haiku Kai is dedicated to Issa and "the little creatures" like fleas, flies and spiders ...or may crickets and grasshoppers:

giddy grasshopper
take care...do not leap and crush
these pearls of dewdrop

how pitiful!
underneath the helmet
a cricket chirping.
© Basho (Tr. Ueda)

upon the branch
observing diligently
the bumblebee

all along the lake
ephemeral creatures fly
gnats and mosquitos

one short month
the life of the butterfly
fluttering merrily by

*  The shortest-lived creatures on the Disc were mayflies, which barely make it through twenty-four hours.
Two of the oldest zigzagged aimlessly over the waters of a trout stream, discussing history with some
younger members of the evening hatching.
“You don’t get the kind of sun now that you used to get, “ said one of them.
“You’re right there. We had proper sun in the good old hours. It were all yellow. None of this red stuff.”
“It were higher, too.”
“It was. You’re right.”
“And nymphs and larvae showed you a bit of respect.”
“They did. They did,” said the other mayfly vehemently.
“I reckon, if mayflies these hours behaved a bit better, we’d still be having proper sun.”
The younger mayflies listened politely.
“I remember, “ said one of the oldest mayflies, “when all this was fields, as far as you could see.”
The younger mayflies looked around.
“It’s still fields,” one of them ventured, after a polite interval.
“I remember when it was better fields,” said the old mayfly sharply.
“Yeah, “ said his colleague. “And there was a cow.”
“That’s right! You’re right! I remember that cow! Stood right over there for, oh, forty, fifty minutes. It was brown, as I recall.”
“You don’t get cows like that these hours.”
“You don’t get cows at all.”
“What’s a cow?” said one of the hatchlings.
“See?” said the oldest mayfly triumphantly. “That’s modern Ephemeroptera for you. “ It paused. “What were we doing before we were talking about the sun?”
“Zigzagging aimlessly over the water,” said one of the young flies. This was a fair bet in any case.
“No, before that.”
“Er . . . you were telling us about the Great Trout.”
“Ah. Yes. Right. The Trout. Well, you see, if you’ve been a good mayfly, zigzagging up and down
properly -”
“- taking heed of your elders and betters -”
“- yes, and taking heed of your elders and betters, then eventually the Great Trout -”
Clop
Clop
“Yes?” said one of the younger mayflies.
There was no reply.
“The Great Trout what?” said another mayfly, nervously.
They looked down at a series of expanding concentric rings on the water.
“The holy sign!” said a mayfly. ”I remember being told about that! A Great Circle in the water! Thus shall be the sign of the Great Trout!”
The oldest of the young mayflies watched the water thoughtfully. It was beginning to realise that, as the most senior fly present, it now had the privilege of hovering closest to the surface.
“They say, “ said the mayfly at the top of the zigzagging crowd, “that when the Great Trout comes for you, you go to a land flowing with . . . flowing with . . .”
Mayflies don’t eat. It was at a loss. ”Flowing with water, “ it finished lamely.
“I wonder, “ said the oldest mayfly.
“It must be really good there, “ said the youngest.
“Oh? Why?”
“ ‘Cos no-one ever wants to come back.” 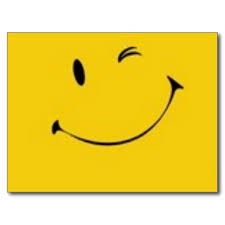