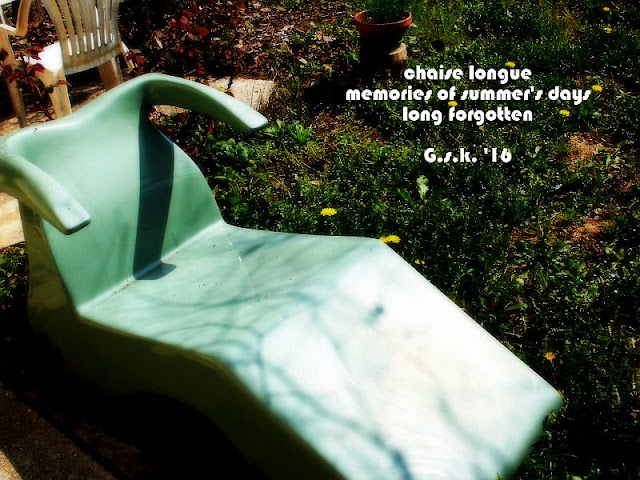 What is "sabi"?   Something old, past, demode ... something that's somehow a faded memory like the old plastic chaise longue in the haiga above,  that in its heyday was an object that made someone happy or proud to own it.  I can almost feel the sensation that must have accompanied that first vision of the object ... the elation.  Now, so many years have passed.  The chaise longue sits in my son's garden in , slowly losing it's lustre as it weathers.  No one remembers who bought it .. the house has changed had many many times over the years as one group of student substitutes another, no one even uses it except the cat. That to me is one meaning of "sabi".

"As fascinated as Westerners have become with the word, the Japanese have maintained for centuries that no one can really, truly comprehend what sabi really is and thus, they change its definition according to their moods. Bill Higginson, in The Haiku Handbook, calls sabi – "(patina/loneliness) Beauty with a sense of loneliness in time, akin to, but deeper than, nostalgia." Suzuki maintains that sabi is "loneliness" or "solitude" but that it can also be "miserable", "insignificant", and "pitiable", "asymmetry" and "poverty". Donald Keene sees sabi as "an understatement hinting at great depths".

So you see, we are rather on our own with this! I have translated this as: sabi (SAH-BEE)- aged/loneliness - A quality of images used in poetry that expresses something aged or weathered with a hint of sadness because of being abandoned. A split-rail fence sagging with overgrown vines has sabi; a freshly painted picket fence does not." As a technique, one puts together images and verbs which create this desired atmosphere. Often in English this hallowed state is sought by using the word "old" and by writing of cemeteries and grandmas."